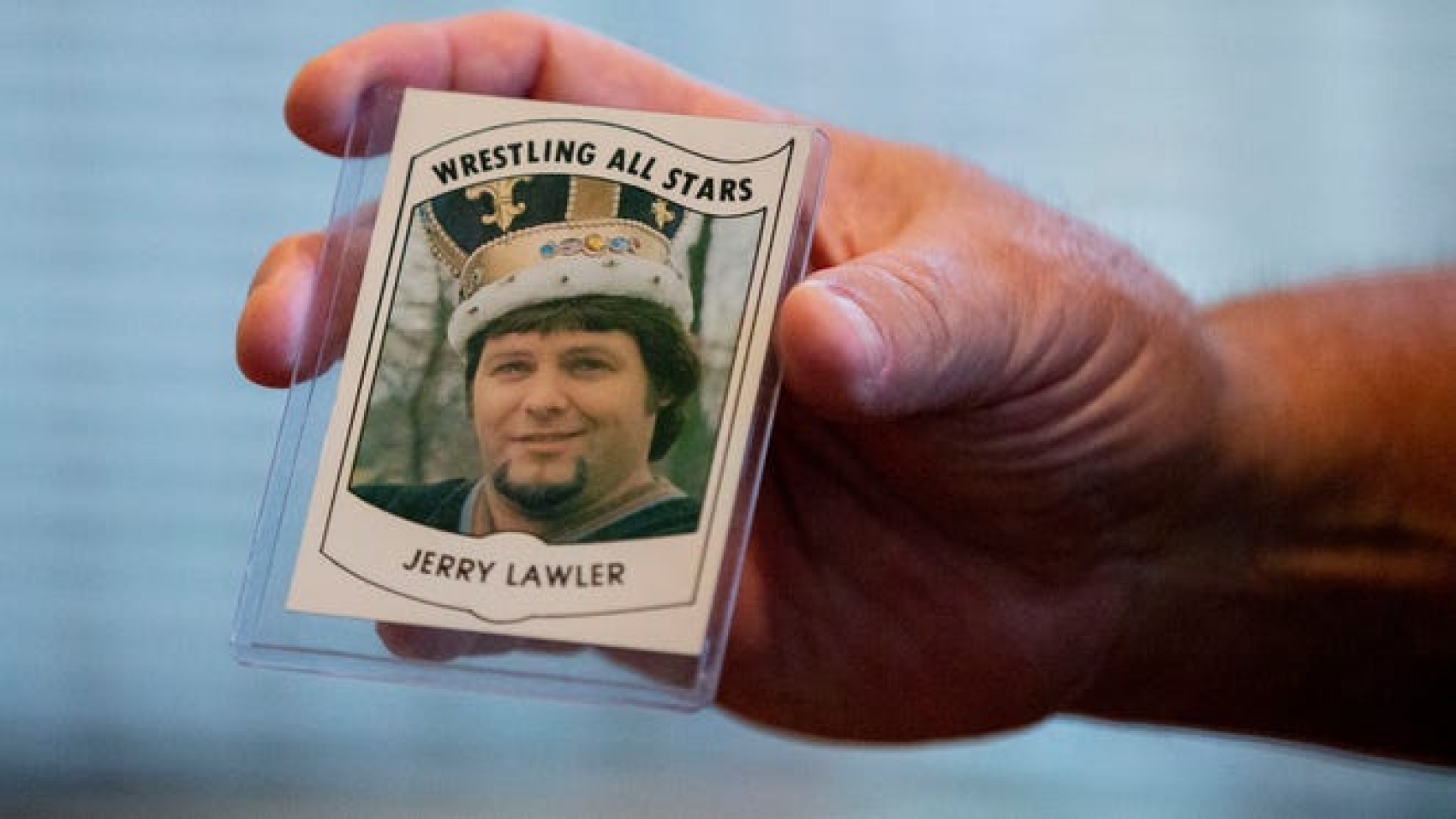 For decades, professional wrestling has had much of Memphis in a headlock. A stranglehold. An eternal loop of a suplex in which we are flipped to the canvas, over and over and over. The referee must be otherwise occupied because he never calls an end to the action. Would you have it any other way?

Wrestling may not be “real,” but it sure is authentic. This quiz, however, is definitely contrived — contrived to supply a modicum of amusement, even to those who don’t know Jerry Lawler from Jerry Lewis or Sputnik Monroe from the Sputnik satellite.

Inspired by the recent presence of Dwayne “The Rock” Johnson in our city and the ongoing production here of Season 3 of his semi-autobiographical NBC comedy series, “Young Rock,” this quiz is like the other Memphis-centric — Memphicentric — quizzes we’ve published over the past couple years. It’s multiple choice, with the answers at the bottom; 22 questions because the year is 2022. If you’re old enough, you might want to imagine Dave Brown or the late Lance Russell reading the questions.

So, let’s ring that bell and begin.

The Rock in Memphis:The Rock meets excited Memphis teen, and millions love it

1. Roscoe M. Brumbaugh was better known to the world as:

2. In 1960, Sputnik Monroe was arrested at Beale and Hernando on a disorderly conduct charge, and ultimately fined $25. Based on a report in The Commercial Appeal, what was Monroe’s crime, according to the arresting officer?

a) “He demonstrated wrestling holds on customers without permission.”

b) “Suspect stood on table-top and performed ‘strip-tease.'”

c) “Suspect ordered ‘drinks for the house’ but had only $7 in pocket.”

d) “He was drinking in a negro cafe with negros.”

3. Fill in the blank: In the jargon of the heroes-vs.-villains world of professional wrestling, a bad guy is a “heel” while a good guy is a _______.

4. After many years at the Auditorium in Downtown Memphis, professional wrestling made its debut at the Mid-South Coliseum on June 7, 1971, where it would be a regular event for the next 20 years. A crowd of 9,523 — more than double the Auditorium’s capacity — showed up that night to witness the grappling of such stalwarts of the squared circle as Sputnik Monroe, Len Rossi, Tojo Yamamoto, Jackie and Roughhouse Fargo, Darling Dagmar, Bearcat Brown and The Fabulous Moolah, to name a few. Not everyone was pleased. Interviewed by The Commercial Appeal, a fan identified as “Mrs. Lillie Butler” complained: “They won’t let me stand up” and “I can’t see a thing.” She also registered this objection:

d) “The policemen are mean.”

5. Fill in the blank: A 1976 story in the Memphis Press-Scimitar reported that “Studio Wrestling” was a “ratings bonanza” that reached “about 287,000 viewers” during its live Saturday broadcasts, from 11 a.m. to  12:30 p.m. on WHBQ-TV Channel 13. “It’s a smash for us,” said co-host and Channel 13 program director Lance Russell. At the same time, according to the story, about 7,000 fans showed up each Monday night for wrestling at the Mid-South Coliseum. Said Russell, comparing the popularity of wrestling to that of a recent concert: “I’m sure the ______ people shook their heads when they sat there with 2,000 people and the next night wrestling draws 7,000.”

Jerry Lawler:50 years of pinning opponents and running his mouth

6. In 1977, when live televised professional wrestling moved from WHBQ-TV Channel 13 — where it had been a fixture since 1958 — to WMC-TV Channel 5, producers tried to elevate the prestige of the program by replacing the Channel 13 jingle-style theme song (“Winter time, summer time, any time is wrestling tiiiiime…”) with what familiar piece of classical music?

a) Rossini’s “William Tell Overture” (better known as the theme music for “The Lone Ranger”).

b) Beethoven’s Fifth Symphony (the one that begins “da-da-da-DUM”).

7. Wrestler Houston Harris — better known by his ring name of Bobo Brazil — was fond of slamming his forehead against his opponent’s forehead. What did Brazil call his signature head-butt?

b) The Percussion Concussion.

8. Wrestler Archie Gouldie was better known as the Mongolian ______.

9. During his brief professional wrestling career in the early 1960s, this short-in-stature teenager was passed off as “The World’s Most Perfectly Formed Midget Wrestler.” He was:

10. Born in Hawaii, Tojo Yamamoto embraced his Japanese heritage to be a particularly flamboyant wrestling villain. He frequently attacked opponents with judo chops, a Kendo stick and a:

b) samurai armored glove, worn on his left hand.

11. With his bleached blond hair, patented “Fargo Strut” and man-of-the-people eloquence (he addressed friend and foe alike as “pally”), Jackie Fargo was — in his own words — “often imitated but never duplicated.” In the 2011 documentary “Memphis Heat: The True Story of Memphis Wrasslin’,” how did Fargo describe his wrestling persona?

a) “I was meaner than a damn rattlesnake and tougher than a two-dollar steak.”

b) “I was such a heel, every time I snarled I added six inches to my height.”

c) “I broke lots of legs and lots of hearts but I never broke a promise.”

d) “I was president of the 4-H club: I was a headlock, hammerlock, heat-wave heartthrob.”

a) “I’m every woman’s dream and every man’s nightmare.”

b) “When I walk in a room the women faint and so do the dogs.”

13. Nicknamed “The Madman from Sudan,” Abudullah the Butcher actually was:

14. In 1975, Jerry “The King” Lawler scored a regional hit on the Barbarian Records label with his cover of:

a) “Mr. Bad Example,” by Warren Zevon. (“I’m very well acquainted with the seven deadly sins/ I keep a busy schedule trying to fit them in…”)

b) “Bad Boy,” by Larry Williams, famously covered by the Beatles. (“He put thumbtacks in teacher’s chair/ Put chewin’ gum in a little girl’s hair…”)

15. Fill in the blank: On April 5, 1982, the Mid-South Coliseum hosted a match that remains the most storied in Memphis wrestling history: Jerry Lawler vs. comic actor-turned-professional wrestling provocateur Andy Kaufman. Interviewed late that night at St. Francis Hospital, where Kaufman was treated for “cervical strain” after Lawler ended the match by dropping Kaufman on his head with a “piledriver” move, the comedian’s friend and acting manager, Bob Zmuda, pledged: “Andy will never wrestle again. Not even _____.’

a) for a million dollars

b) if Mr. Lawler apologizes for his uncouth barbarity

16. Fill in the blank: Later that year, on July 28, Lawler and Kaufman (wearing a neck brace) staged an infamous and seemingly hostile reunion on “Late Night with David Letterman” that reached an emotional climax when Lawler delivered what appeared to be a devastating slap across Kaufman’s face. (Years later, Lawler admitted the feud was staged.) Before the slap, Lawler asked Kaufman, “Is that a neck brace or a flea collar?” and he assured Letterman the enmity was not “an act.” Said Lawler: “I couldn’t warm up to this guy if _____.”

a) my pants were on fire

b) we were dropped into a volcano

c) we were on the set of ‘The Towering Inferno’

d) we were cremated together

17. Mix and match these words to come up with the name of three popular wrestlers: Brickhouse; Brown; Bundy; Cash; King Kong; and Porkchop.

18. With shoulder-length platinum blond hair and a Mark Spitz mustache, a wrestler calling himself “Eddie Boulder” grappled here in the late 1970s and early ‘80s accompanied by “Terry Boulder,” a tag team partner who was presented as his brother. Terry Boulder was Terrence Eugene Bollea, now better known as:

b) Andre the Giant.

d) The tag team known as the Bruise Brothers.

20. In one of the more surreal episodes in Memphis pop culture history, actor Adam West — who was in town to appear at a Cook Convention Center car show — showed up on the wrestling TV show in 1976 as his signature character, Batman. Interviewed by co-host Dave Brown, West — as deadpan here as he was when he played the Caped Crusader on his hit 1960s series — praised the “Bat-fans” of Memphis and chided the villainous “evil king of Memphis,” Jerry Lawler, who confronted West in a modified Superman costume and called himself “Super-King.” Batman counseled Lawler to abandon his “naughty, mean” ways and become “polite and courteous.” He specifically counseled Lawler to:

a) “Use your left and right turn indicator in your car.”

b) “Always remember to return the toilet seat to the ‘down’ position.”

d) “Call your mother once a week.”

21. “We’re very naughty by nature, and we’re very violent by decision,” said a wrestler calling himself “Flex Kavana,” when he made his Memphis wrestling debut during the Saturday morning Channel 5 program in 1996. Before long, Flex Kavana would be known around the world as:

22. A comedy inspired by wrestler-turned-actor Dwayne “The Rock” Johnson’s childhood and young adulthood, the third season of the NBC series “Young Rock” is now in production in Memphis, shooting on location (on Front Street and at the Annesdale-Snowden house, among other places) and on sets built inside:

a) The former Skateland building on Old Summer Road.

b) The exhibition hall at Graceland.