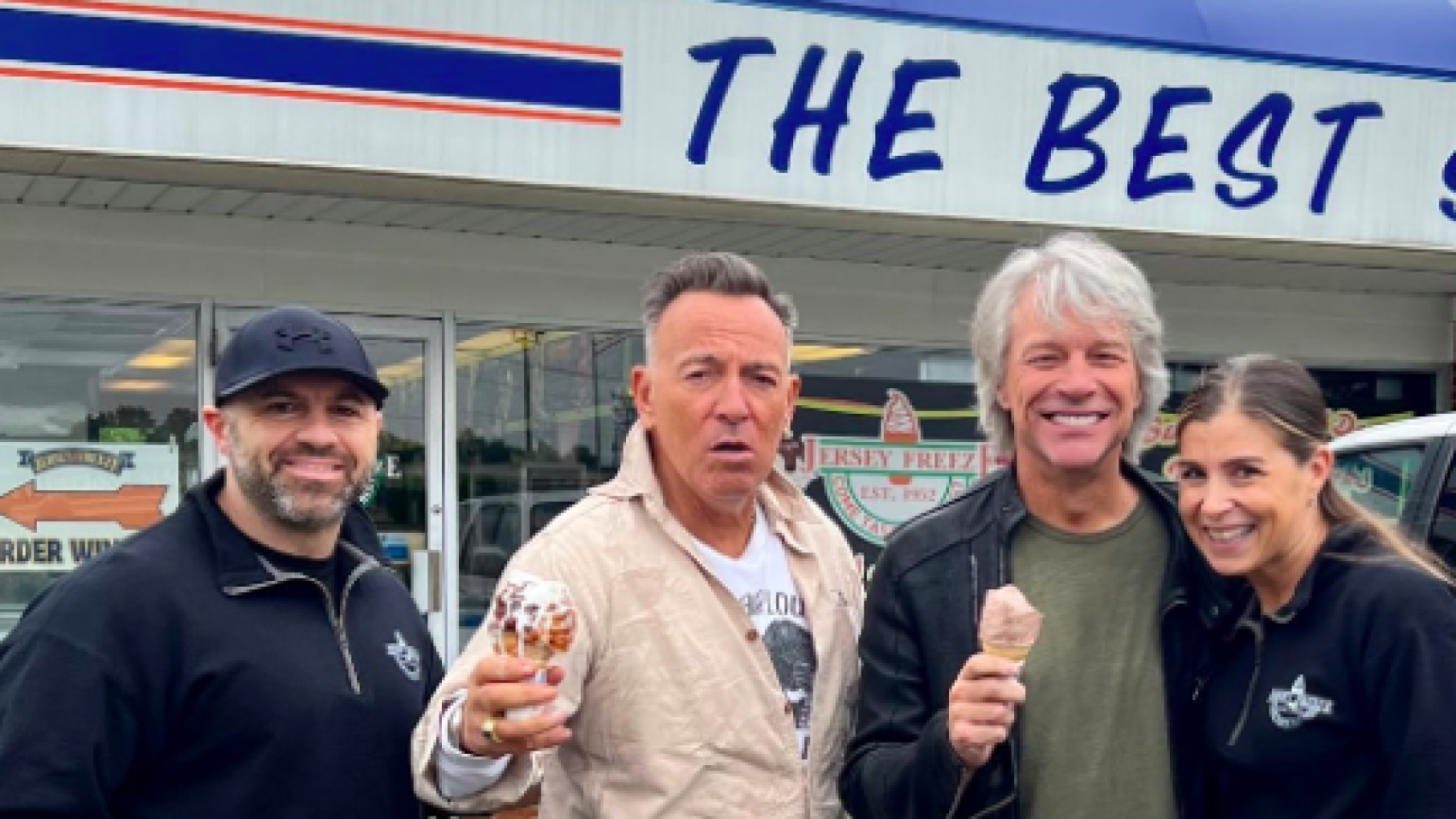 That’s not the beginning to a joke. It actually happened Wednesday when Bruce Springsteen and Jon Bon Jovi showed up at Jersey Freeze in Freehold to enjoy a couple cones.

The Jersey icons rolled up together in style – Springsteen’s sports car – before ordering ice cream and posing for some pictures. The Jersey Freeze Instagram account shared a photo of the Rock & Roll Hall of Famers with owners Matt Cangialosi and Katie DiNonno.

“When (two) of the biggest Rock Stars in the world show up for (ice cream) together, it’s worth a picture,” the caption reads.

Both musicians have been to the ice cream shop before, with Springsteen coming as much as twice a month, Cangialosi said. But it was a rare sight to see them at the same time.

Springsteen, who was born in Long Branch, has been visiting Jersey Freeze since he was a child with his family.

“Bruce comes in all the time, Bon Jovi’s been here a few times, they just never come in together,” Cangialosi told PhillyVoice. “No one usually ever bothers them for a picture, but it was kind of cool that they were there together yesterday. So, we felt like we had to ask … When they both got out of the same car, we were like, ‘No way, is that Bon Jovi? Yeah that’s Bon Jovi! Oh my God, they’re together!’ So that was pretty cool.”

Not only did Springsteen and Bon Jovi pose with the Jersey Freeze owners, they also spent time engaging with the other patrons.

“They were so nice,” Cangialosi said. “Bon Jovi took some selfies with some kids in the parking lot, and they hung out for a little bit.”

Now, for the most important question: What did they order?

These members of New Jersey royalty not only enjoy getting ice cream together, but they also have linked up musically in the past. They each performed at President Joe Biden’s “Celebrating America” inauguration concert in January 2021. Last summer, the pair joined Paul McCartney onstage at Met Life Stadium to sing a few songs with the legendary former Beatle.

Bon Jovi, born in Perth Amboy, Middlesex County, and his band went on a 15-show tour last spring and plan to tour again in 2023.

Springsteen’s 21st studio album, “Only the Strong Survive,” which features a collection of soul covers, will be released in November. In 2023, he is embarking on an international tour, which will include his first Philly stop in seven years.

This wasn’t the first time in recent history that Springsteen was spotted with a famous friend in New Jersey. Last fall, he was spotted walking around Bay Head, Ocean County, with fellow rocker John Mellencamp.

Thanks to Wednesday’s double-celebrity sighting, a lot of music fans in the region may suddenly, suspiciously, be in the mood for some Jersey Freeze ice cream, despite the cooling fall temperatures.