For the first time in three years, multi-platinum-selling hit-makers Matchbox Twenty are on tour! The alt-rock band comes to BB&T Pavilion on Sunday 16th July 2023 (Rescheduled from Sunday 17th July 2022) (Rescheduled from Thursday 22nd July 2021) as part of the massive 50-date stint, which sees them performing hits from their four-album back catalog, as well as brand new material! The band will be joined in support by LA alt-rock band The Wallflowers!

“I’m proud to be a part of the greatest pop rock band in the world and I can’t wait to play with them again. Stepping on stage with Matchbox and sharing those songs with the fans feels as natural as breathing to me at this point,” says frontman Rob Thomas about the new tour. 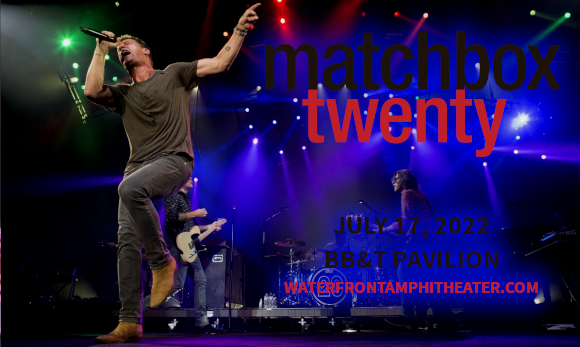 American alt-rock band Matchbox Twenty found instant success with the release of their 1996 debut album, Yourself or Someone Like You, which was certified 12-times platinum (diamond) in the United States, as well as multi-platinum in Australia, Canada, and New Zealand, and launched several top 40 singles: “Push”, “3 A.M.”, “Real World”, and “Back 2 Good”. Formed in 1995 in Orlando, Florida, the band originally consisted of several members of the defunct rock band Tabitha’s Secret. Their second and third albums, Mad Season (2000) and More Than You Think You Are (2002), were also certified multi-platinum, helped in part by the success of lead singer Rob Thomas, who featured on the three-time Grammy Award-winning Santana single “Smooth” in 1999. Over the following decade, the band experienced a few periods of inactivity and changes in line-up, but returned to music in 2012 with the release of their fourth studio album, North, which debuted at number one on the Billboard 200.